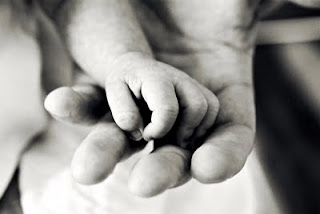 I remember how proud and excited I was the day I brought my oldest son, Jon, home from the hospital. Everything had changed. I drove more carefully, I was protective of my baby and Mary Ann, a new sense of responsibility enveloped me.

As he began to grow and develop I started to recognize some of me in Him and it warmed my heart. Jon is a combination of Mary Ann and me, in many ways he is our image even though he is a unique individual in his own right


Any mother knows the awesome miracle of a child that has come from her womb. Here is “flesh from my flesh.” The bond between mother and child is a deep and profound one.

There is a mystery in creation that will remain a mystery until we see God face to face. When He chose to create men and women, why did He choose to create them after His own image? Here is God, the one who has no beginning and no end, who is three persons in one, living in perfect unity and fellowship (God the Father, God the Son and God the Holy Spirit), who is divine, holy (morally pure), transcendent (above all things), sovereign (has all power), and yet he chooses to make men and women in His image! None of the rest of creation was made in His image – just men and women.


In making us in His image, God gave to us a dignity, an importantance, a kinship with Him that is unique and unparalleled. Just as Jon has “me” in Him, God planted something of “Him” in us that made us unique, important, precious to Him.
We are not random creatures here by fate to be buffeted by the capricious winds of history. We are men and women, precious to God, known by God, and made in His very image.
What does it mean that we were made in His image?
First it meant that we could have intimate relationship and fellowship with the eternal God of the universe and more astonishingly He desired (and still does) that relationship. Just as the Father, the Son and the Holy Spirit have fellowship with each other, we can have fellowship with one another and with Him.
Second, we were created with a moral dimension unlike the rest of creation. We were created with the ability to choose holy and moral actions over immoral and evil actions. That is why, even after the fall, we sense guilt and shame when we do something we know to be wrong. We have a built in moral compass, affected by the fall but whose residue remains.