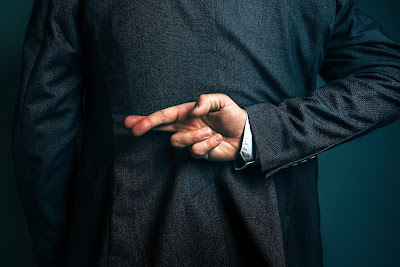 Christian ministry should be about truth and honesty. Often it is about spin and dishonesty. In fact, there are often no better politicians than Christian leaders who use Christianese to hide their real feelings.

We often say, God bless you, when in truth we don't want God to bless them at all. It's kind of like the south where I live. If someone says, "Bless their heart," you know that something derogatory is coming.

We say, I am praying for you when in truth we rarely think of the person we are saying that to.

We say, Blessings, when in fact we would rather have God's judgement fall on them.

When things go wrong we spin the situation to pretend that it was God's will that what happened - happened. When in fact, it could more easily be credited to our poor decision making. Often, we credit or blame God for things He had little or anything to do with. I wonder if such comments surprise Him.

When leaders spin dysfunction as they did at places like Mars Hill, Harvest Bible Chapel or Willow Creek to justify behaviors that cannot be justified they are in fact lying to their congregations as they have now acknowledged in all three situations. Spin that is untrue is a lie.

Kind and diplomatic words when not true are not kind. They are lies. How often do we lie when we say, "I am praying for you?" Since Jesus says that all of our words will one day be evaluated for their truthfulness, I wonder how many of our kind and Christianese words are actually untruths or more pointedly lies.

I have been guilty of this and I suspect all of my readers have as well. Lies hidden behind Christian language and "concern" are still lies and maybe worse lies because we put God into the equation.

I am all for kindness and diplomacy as long as they are genuine and truthful. When they are not we are better off keeping quiet or not saying things that are untrue. I know people lie in Washington. But they also lie in the church and that is not good.