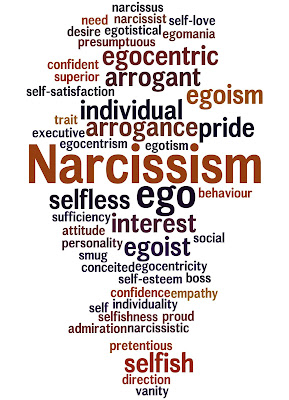 One could immediately say “that is an oxymoron,” and they would be right. However, as unhealthy and destructive as narcissism is, adding the spiritual component to it is even deadlier. My observation is that there are a disproportionate number of “spiritual narcissists” who find their way into Christian ministry. Perhaps it is easier to get away with this behavior in the church where we are reticent to name unhealthy behavior for what it is. Unfortunately they leave relational havoc in their wake wherever they are found. That is a consistent pattern.

Narcissism is really pride gone amuck without the counterbalance of humility. It can be very subtle or it can be “in your face.” Often times it is hidden behind a compelling personality that draws others to them but often in unhealthy ways such as emotional triangulation where I draw you into my orbit by creating a bond with you against another individual or group. The bond and friendship, often very close, lasts as long as you agree with them and once you start to disagree or think independently you find yourself on the outside.
What are the signs of narcissism? Consider these.
·  Wherever you have a narcissist, you have complicated relationships where alliances are formed and where people eventually get hurt and discarded when they no longer toe the line. One narcissist on a team can cause havoc with the whole team and often people don’t really understand the dynamics of what is happening. By definition, a narcissist will divide people into those who are with them and those who are against them which divides teams and causes ugly division.
The spiritual narcissist is one who not only has tendencies like these but who then brings Scripture and God into the equation. Not only are they right but God is on their side! Any disagreement becomes grounds for “reconciliation between brothers” which really means, “You need to agree with me.” For narcissistic leaders, it often means, “God is leading me (and therefore you) in this direction and you must follow.” Those who question or don’t wholeheartedly follow become marginalized. When you confront, “you are not loving.” When you have a disagreement, “brothers need to live in unity.” When you discipline for behavior that is not healthy, “you don’t have grace.” In other words, you never win, you are always the one who is at fault and not only have you violated them but Scripture or God as well. You cannot win for losing!
All of this can make one crazy and wonder if it is indeed them that are at fault – after all narcissists are experts at making you feel that way. Ironically, a narcissist finds great pleasure in causing you pain while those they inflict it on are actually sensitive to the very issues raised because their own humility is greater than that of the narcissist.  This is where being wise as serpents and innocent as doves comes into play. We need to understand the MO of a narcissist and insist that the behavior is unacceptable no matter how much they deflect issues back to us.