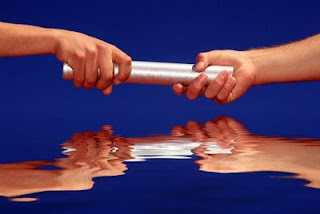 Leadership transitions are frought with peril. Four years ago when I was named the Executive Directior of ReachGlobal, my predecessor gave me a great gift. He made it exceedingly clear that the role was now mine, that I would never hear a negative word attributed to him and in every conversation, public and private he was only positive. Then he gave me a baton, symbolizing the leadership transition.

Because of the huge trust I have in him, I asked him to stay on as a Global Ambassador for ReachGlobal. It would not have worked in many situations but it has worked perfectly for us. In large part because of how he handled his own transition.

On the other hand I have watched other leaders, organizational, pastoral transition very badly and the end result is that it hurts the organization.

Why do many leaders transition badly?

I think there are a number of factors. One is that they cannot let go. They have invested too much and are unable to take their hand off the wheel and essentially hand off the baton. In a race, once the baton is handed off, it is over for the previous runner. Some people do not have the emotional intelligence to accept the fact that their run is finished.

Second, many leaders are unable to celebrate a different kind of leadership - which it will be from theirs - when somone else is not in charge. They second guess them, are unhappy with staff or directonal decisions and either publically or privately make their views known. In either case the views become public and it hurts the new leader.

Part of the reason can be defensiveness and even an unhappiness at the success of the new leader. Their success can be seen as a failure for the previous leader - after all it did not happen on their watch. Whatever the motivation for not being supportive or for speaking ill or even remaining neutral - there is something coming from a unhealthy place.

In a healthy transition, the past leader makes a commitment, as mine did that he would only speak positively, would never criticize or even take a neutral attitude. What is interesting is that while I stand on his shoulders as a leader, I am a very different leader for a very different day. He could have taken exception to a number of decisions that I made but he never did. Not to me and not to others.

His wonderful, supportive attitude came out of a place of spiritual health. He had prayed for his sucessor for years before the transition happened. He had also been clear that he would support that successor no matter who it was. So when I was chosen, and I would not have been his choice, he could and did say, this is who I have been praying for, this is God's choice and I will be fully supportive. And he was from day one.

It takes humility to see a successor who has strengths we do not have exercise them and see success. But his success will not be my success and the reverse is also true. We are different people with different strengths for different times.

Healthy leaders are willing to understand that their leadership is finished and refuse to get involved in the discussions, details or offer counsel unless it as asked for by the new leader and then only to him or her. People will fish for the opinion of the prior leader, wanting to know their opinions of the new leader and any criticisms there might be. After all, the staff have relationships with the prior leader. Healthy leaders never get drawn in and simply remain supportive.

Wise new leaders honor the past even as they reinvision for the future. There is never a need to put down the past leader (indicates poor EQ on the part of the new leader), nor is it necessary to critizice the past. New days requrie new strategies and the fact is that will be true when we give up our leadership post as well.

When I leave this position my intention is:

To walk away with thanksgiving for the opportunity I had

To publically and privately support the new leader

To pray for that leader and their leadership

To never be critical of the new leader or new direction

To celebrate the gifts and qualities of the new leader.

I learned from the best. Thank you Ben