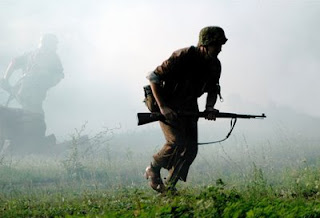 Our world is a battle zone between the forces of God and the forces of the evil one who is committed to disrupting and destroying everything that God wants to do to repair a broken world and bring His good news to lost men and women. The problem is that the battle is unseen. We see its effects and feel its reality but we are easily lulled into thinking that if we simply do the right thing that people will respond to the gospel.

There is no more seminal passage on this than that of Paul’s in Ephesians 6.
”Finally, be strong in the Lord and in his mighty power. Put on the full armor of God so that you can take your stand against the devil's schemes. For our struggle is not against flesh and blood, but against the rulers, against the authorities, against the powers of this dark world and against the spiritual forces of evil in the heavenly realms. Therefore put on the full armor of God, so that when the day of evil comes, you may be able to stand your ground, and after you have done everything, to stand. Stand firm then, with the belt of truth buckled around your waist, with the breastplate of righteousness in place, and with your feet fitted with the readiness that comes from the gospel of peace. In addition to all this, take up the shield of faith, with which you can extinguish all the flaming arrows of the evil one. Take the helmet of salvation and the sword of the Spirit, which is the word of God. And pray in the Spirit on all occasions with all kinds of prayers and requests. With this in mind, be alert and always keep on praying for all the saints.
Pray also for me, that whenever I open my mouth, words may be given me so that I will fearlessly make known the mystery of the gospel, for which I am an ambassador in chains. Pray that I may declare it fearlessly, as I should.”
Paul truly believed that a battle is being fought in the heavenly realms and that the truth of the word, the transformation of salvation and the practice of prayer are both the defensive and offensive weapons of the believer. He constantly asked for prayer for his own ministry as he does in verse 19, knowing that prayer was the key to engaging the help of God’s Spirit.
If there is a front line to God’s work it is the ministry of missions where there is a concerted effort to reclaim territory from the enemy. As in any battle, the more aggressive the effort, the more aggressive the response. The enemy holds billions of our world’s population captive to false religions, materialism and personal satisfaction. And the enemy has no intention of giving up any substantial ground to Christ.
There is a reason that Islam so militantly hates Christianity and will do anything in its power to stop it: It is enemy territory and its people are held captive by Satan. There is a reason that radical Hinduism will go as far as to kill believers: it is enemy territory that the evil one believes belongs to him. There is a reason that so many in our world are held captive in animism and fear of the spirits. It is the enemy’s way of keeping billions from looking to Christ.
There is a reason that Western Europe is so hard to the gospel. The enemy has used materialism and humanism as false but alternative routes to truth. There is a reason that many Buddhists are resistant to the gospel: the enemy has convinced them that there are many possible routes to truth and God. As Paul said, “Satan himself masquerades as an angel of light" (2 Corinthians 11:14). The account of Paul’s missionary journeys in the book of Acts were a constant battle between the truth of the gospel and the resistance of Satan.
We will never know until eternity the full extent of the unseen all out war that is taking place around us but blind to us apart from seeing the effects. The prophets Daniel and Ezekiel, however give us glimpses of that spiritual war and the New Testament proclaims it’s reality.
Paul, the greatest New Testament figure in the spread of the Gospel and the first major missionary constantly spoke of the need for prayer in his ministry and the proclamation of the gospel. He knew that he was treading on enemy soil and that offensive and defensive weapons were needed to see success.

It is highly significant that the inauguration of Christ’s ministry was marked by two distinct events. The first event was the baptism of Jesus by John the Baptist. As soon as Jesus was baptized “heaven was opened, and he saw the Spirit of God descending like a dove and lighting on him. And a voice from heaven said, ‘This is my Son, whom I love; with him I am well pleased (Matthew 3:16-17).’”
That testimony from heaven itself was the enemy’s deepest fear and the realization that this, finally, was the One who would crush him (Genesis 3:15), who would bless the nations through Him (Genesis 12:1-3), who would suffer and rise again (Isaiah 53), who would overcome the evil one and reign triumphant (Daniel 9-12), the one whom he had tried to eliminate through Herod’s killing of the children at Christ’s birth.
His adversary from the days of the garden had finally arrived in person on his soil and the battle lines were drawn. For He came with a proclamation of an eternal and holy Kingdom that would encroach on the enemy’s territory.
And the enemy knew it - for the second event of the inauguration of Christ’s ministry was a direct attempt by Satan to subvert his calling in the temptation of Jesus in the wilderness. Here was an amazing scene: the God of the universe in personal confrontation with the devil himself. Finally, the devil had the opportunity to personally confront and tempt the One who he had feared since the fall, and with the rebuke of Christ, would continue to fight a losing but bruising battle until the final battle when heaven rules supreme.
The temptation of Christ serves as a lesson to us. If the devil had the audacity to challenge the God of the universe, what will keep him from challenging and confronting us as we seek to take back what rightfully belongs to God and to turn the hearts of people from captivity and bondage and sin to freedom and grace and righteousness! At every level he will challenge the gospel and the greater the threat, the greater the pushback.
That is why the spread of the gospel is often accompanied by the blood of the saints. In 1 Corinthians 16:9 Paul connects the great open door he has in Ephesus with many who oppose him. Great opportunity usually comes with great opposition.
It is foolish and naïve for us to think that we can engage in this front line battle without the greatest spiritual protection that we can possibly gather. The most important thing we can do is to ensure that we have the offensive and defensive weapons that Paul speaks of in Ephesians 6, recognizing the reality of the battle and our deep need for spiritual resources to fight what is a spiritual war.