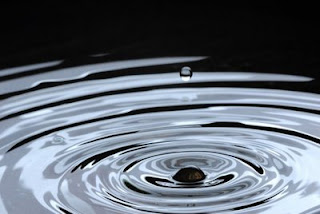 Changed lives is the coin of God’s Kingdom and influence with people is the key to seeing lives changed. It is the stuff that legacy is made of especially because influence creates ripples and ripples continue to create even more ripples – it is the nature of influence.
Drop a pebble in a pond and what happens? There is not just one splash but the splash creates ripples that reverberate across the surface in ever widening circles. Drop a bunch of pebbles in a pond and the various ripples hit one another and create small waves that start moving the whole surface. It is the nature of influence.
The most important work we do for Christ is that of rippling on others for Him. Christ rippled on his disciples, they rippled on the new believers in Jerusalem, who in turn rippled on the whole world as they were forced out of town by persecution and ended up on the highways and byways of the Roman Empire. It was one ripple at a time that changed the course of civilization forever.
If Barnabas had not come alongside Paul when the other Apostles were frightened of him, his ministry would not have gotten off to the start it did (Acts 9:26-31). It is not an accident that his name means “son of encouragement.”
The very reason God gave spiritual gifts to every Christ Follower is to allow them to ripple on others. Whether it is teaching, healing, faith/prayer, administration, leadership, care, giving or a whole host of other ways we have been gifted, these are gifts given so that we can influence others in the church and the world for him. One splash, many ripples!
My mother in law was a simple woman. Originally from Sweden, she came over by ship and got so sea-sick that she swore she would never go back. She met her future husband in English class in St. Paul. He was an immigrant from Ukraine, having lived through the Second World War, having served in the Russian, German and American armies (it is a long amazing story. Neither of them learned English too well and for the first five years I dated Mary Ann, I just said yes to every question they asked – not being able to understand very well.
Not only was Gunberg a simple woman, she was a quiet woman. She served as a nurses aid throughout the years at Miller and then United Hospital. She spent hundreds of hours with her four grandchildren, two of them ours.
What amazed many was how many came to her memorial service when she died from complications of a car accident. Never had she served on a committee in the church or had any visible ministry. But we heard story after story of people she had demonstrated small acts of kindness too, making meals, visiting, sewing clothes, giving money, helping neighbors and the list went on. The number of peoples this simple woman had rippled on was amazing, like Dorcas in the New Testament.

She was not a theologian, she had little wealth, she had a low level job, she was a first generation immigrant and she touched an amazing number of people – no doubt part of the reason that my wife and sons also have a heart for the underdog.

The heart of our ministry is people
It is people that God created for eternal purposes. It is people that He died on the cross for so that our sins could be forgiven. It is people that God loves with an indistinguishable love. While the world pursues things and bank accounts and properties and fame, God and His people pursue people. Stuff will not outlast our world but every human being has an eternal destiny – either with God or without him.
Most of you, like me, are just “ordinary workers” to quote my son. We are not people of great resources or wealth. We have average jobs and income. We are not famous or well known. But all of us have the one thing that we need to make ripples for Christ – we are surrounded by the very people He wants us to influence.
Two critical skills
Our world is desperate for love. In order to ripple like Jesus wants us to we need to develop two skills that Jesus had. The first skill is to see people as Jesus saw them. Hundreds of people would trail after Jesus and the disciples and in their exhaustion would often see those people as “irritants. Jesus on the other hand, saw them as “sheep without a shepherd, looking for love and answers.
When Mary Ann first came to the High School as the student nurse she would see kids like the disciples did, “bad kids,” “troubled kids,” with a bit of judgement. God changed her as she got to know the bad and troubled kids and now sees them as hurting kids with a lot of pain. That is the difference perspective we need to develop if we are going to ripple on those around us.
The second skill we need to learn is to love people like Jesus loved them. He met their needs, He expressed compassion, He came with an attitude of grace rather than judgment, He befriended the sinner, the prostitute, the leper, the outcast. His ministry was actually more on skid row than on easy street. The reason that bad or poor or marginalized people responded to him was that he offered love rather than judgment, grace rather than condemnation and hope rather than life as it was.
We were created to ripple on those around us. Our neighbors, the guys and gals at the homeless shelter, our colleagues at work, our friends and fellow sojourners at church. Think of the power of all God’s people rippling on those who they come across!

Ripple in your sphere of influence
Each of us has a unique sphere of influence. One of my friends, because of his profession runs in economic and political circles I will never be a part of. God has uniquely placed him there to ripple on people most of the rest of us cannot influence.
My sphere of influence is largely within the church community around the world. My responsibility is to have as much influence for Christ in those circles that I possibly can – using the gifts God has given me.
My wife, Mary Ann has had the opportunity in years past to ripple in a middle class school of 2,000+ where no soap opera or TV show could match what happens in real life. This is a group that the church by in large is not reaching and frankly would be shocked if they knew the challenges our next generation faces. She created huge ripples with her gifts of grace, mercy, honesty and loving care.