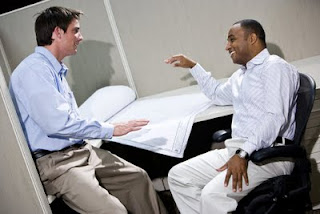 A common issue related to poor Emotional Intelligence (EQ) is relational enmeshment. This is when we allow ourselves to become enmeshed in someone else’s issues and take on their issue or their offence. This happens in families all the time where two members of the family will triangulate against a third rather than dealing with issues directly. So Tom who has an issue with Mary will talk to Bill about Mary. Bill take up the offence and there is therefore pressure on Mary by both Bill and Tom to conform. What Tom has done is enmesh Bill in his issue.
This happens in churches and workplaces all the time. It is bluntly a violation of Matthew 18 and the coward’s way out of dealing with conflict. Rather than dealing with the person we have an issue with we bring someone else into the equation and enmesh them in the problem.

Healthy individuals do not allow themselves to be drawn into other people’s issues. They may well seek to help that individual solve the problem in a healthy manner but they do not triangulate, nor do they take on the offenses of others. Often in cases like Tom, Mary and Bill, the two with the issue solve the problem but the one who became enmeshed, Bill, continues to carry it in his heart – unresolved - which is not surprising since it was not his to resolve in the first place.
How do unhealthy leaders triangulate or enmesh others in their issues? Often they do so by playing the victim role. They communicate their hurt to those who they feel are sympathetic and draw those folks into their circle of hurt against those who they feel have hurt them. It is dangerous and hurtful when pastors (or others) do this because those they triangulate with have no way of solving the issue since they are not a part of the dispute. So, even when the pastor resolves his issue, those who he has enmeshed often continue to carry ill will toward the individual that the pastor had an issue with.