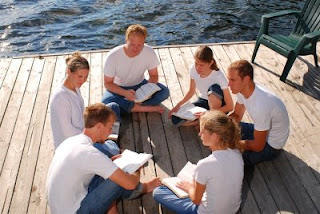 Those of us who are deeply involved in ministry, as leaders, team members or volunteers constantly need to be reminded of one very important truth: It is all about the Gospel!

Paul put it this way in his summation and introduction to the book of Romans. These two verses (Romans 1:16-17) sum up the message of Romans and the gospel.

"I am not ashamed of the gospel, because it is the power of God for the salvation of everyone who believes; first for the Jew, then for the Gentile. For in the gospel a righteousness from God is revealed, a righteousness that is by faith from first to last, just as it is written: 'The righteous will live by faith.'"

Paul's first statement is interesting: He is not ashamed of the gospel. Why would he say that? I believe because many in his day were indeed ashamed as in our day. It was too simplistic (simply by faith), it was politically incorrect (there is only one way), it was intellectually stupid (God on a cross) and it was flawed in its premise (you can do nothing to earn salvation - it is simply by grace).

Paul was no intellectual slouch! But he understood the premise, power, truth, and plan of God in the gospel to do what no other religion could do - transform sinful men and women from all walks of life into walking billboards of God's grace through simple faith and he refused to be ashamed of this gospel, or to try to make it more palatable. It is what it is: The one and only way to Jesus and a life of relationship and significance.

It is easy to forget in our strategies, programs, events, plans and ministry that everything we are and everything we do is ultimately focused on the simple gospel of Jesus Christ. That gospel has the power to change any individual who will simply trust, intervene in any situation that we will give to God and transform corners of society that are infected by its truth.

John McArthur writes this about Paul. "Paul was imprisoned in Philippi, chased out of Thessalonica, smuggled out of Damascus and Berea, laughed at in Athens, considered a fool in Corinth, and declared a blasphemer and lawbreaker in Jerusalem. He was stoned and left for dead at Lystra. Some Pagans of Paul’s day branded Christianity as atheism because it believed in only one God and as being cannibalistic because of a misunderstanding of the Lord’s Supper.

But the Jewish religious leaders of Jerusalem did not intimidate Paul, nor did the learned and influential pagans at Ephesus, Athens, and Corinth. The apostle was eager now to preach and teach the gospel in Rome, the capital of the pagan empire that ruled virtually all the known world. He was never deterred by opposition, never disheartened by criticism, and never ashamed, for any reason, of the gospel of Jesus Christ."

I ask myself and I ask you: Do we have that kind of drive and that kind of passion to see the gospel spread across the regions where we work? The work of spreading the gospel is not a job: it is the greatest privilege anyone could ever have and the greatest responsibility given to man by God. There is hope and power and forgiveness and grace and eternal favor wrapped up in that message.


Do we believe that much in the power of the gospel? Do we believe that God wants to transform hundreds of thousands of lives through the work we do and the movement leaders we support? Do we believe that the gospel has that kind of compelling magnetism and spiritual power? The kind of power the raised Christ from the dead and set him above every rule, authority, power and dominion and title that can be given, not only in the present age but in the one to come?