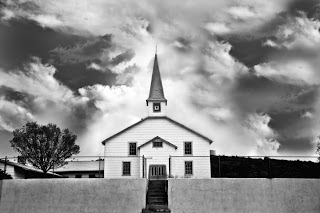 The vast majority of churches in the United States - and around the world are relatively small - and often undervalued. Because numbers are seen as the sign of success in the United States it is the mega church that gets the praise. However, the majority of believers worship in relatively small congregations and they are led by pastors as committed as those who lead large churches.
There are many advantages to a smaller congregation. It is more like family, relationships are stronger, and it is harder to get lost in the crowd. Pastors of small churches are closer to their people and often more intimately acquainted with those they lead.
Nor is there any less creativity in smaller churches. One church I know in North Dakota is providing the preaching for three tiny congregations in rural areas that are losing population via video. They have kept the doors open in communities that would otherwise lose their church because they cannot afford a pastor. They also have a staff member who travels to those communities each week to be hands on as a pastor.
I admire those pastors who are called and faithfully serve smaller congregations. They do not get the spotlight and no one flocks to their conferences. But they pastor faithfully in circumstances often more difficult than larger congregations with their resources and staff. They join the vast majority of pastors down through the centuries who have served small congregations.