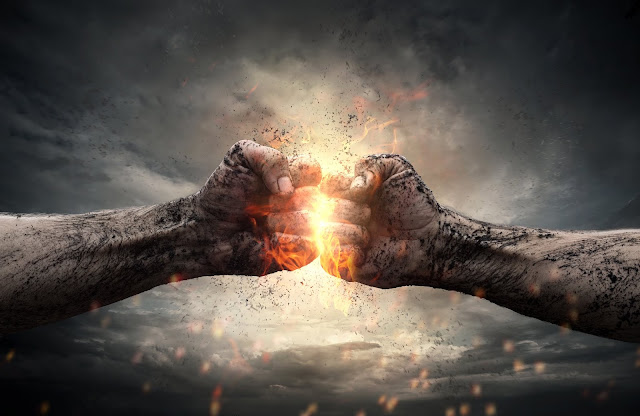 1. Churches are like families and all families face tensions at one time or another. When my immediate family gets together for a reunion from my parents on down there are over 100 present. No family makes it through without disagreements, bad feelings from time to time or irritations. Churches are nothing more than an amalgamation of families and it is only the Holy Spirit that allows most congregants to do well with one another when you consider the different backgrounds, social levels, political views and ethnic groups that make up the average church. By definition then, all churches will have conflict.
2.  Bad Emotional Intelligence (EQ) is a significant factor in church conflict. The inability to control our emotions, anger and words all contribute to the heightening of conflict rather than the de-escalation of conflict. The lower the combined EQ of the congregation the more likely that conflict will escalate and that behaviors will get out of hand and inflame the situation. In congregations with good EQ, there is a recognition that our behaviors, words and attitudes must be kept in check so that rational conversations can take place, hopefully leading to greater understanding.
3. Personal agendas from people who have influence. Personal agendas in the church are problematic for two reasons. First, the agenda for any congregation is already set by Jesus, the Lord of the Church and understanding His agenda is the role of church leaders. Second, anytime an individual seeks to impose their agenda on the church they have violated the principle of leadership by a plurality of Godly leaders. No one gets their way in the church except Jesus. Trying to impose our will will inevitably lead to conflict with those who do not agree with our agenda.
4. Leaders who do not run good process in change management. Change without a good process that allows people to understand, buy in and be a part of the process will create conflict. In one church I attended, there was an executive decision to cancel all ABF groups which disenfranchised and angered many who found them to be helpful and important to their spiritual growth. Whether the decision was the right one is not the issue. The lack of process inflamed emotions and led to larger conflict within the church. When church leaders do not pay attention to bringing people with them (process) they will incur the wrath of those who feel that their church was stolen from them.
5. Senior pastors who are dysfunctional and lack wisdom, discernment and Emotional Intelligence. These may be brilliant preachers and teachers but the deficits noted above will eventually create significant conflict as they disempower people, marginalize those who do not agree with them, and treat people poorly. Eventually the pile of bodies behind them is significant enough that people start to pay attention and the dysfunction creates chaos which in turn fuels conflict. Lack of wisdom in change, in how we treat people, in running process all contributes to eventual conflict.
6. Lack of clarity. In the absence of clarity (who are we? where are we going? what is our preferred culture? What are our non-negotiables?), people create their own clarity and vision for the church. Soon you have multiple visions for the church and ultimately those visions will collide and create significant conflict over who we are and where we are going. Being everything to everyone will end up with conflict.
7. Poor leadership from leadership boards. In most church conflict I ultimately hold elected leaders responsible either for ignoring the symptoms above or for not handling the conflict well. Boards that allow senior leaders to mistreat staff or congregants, who don't help the church get to clarity, who ignore known issues that become larger issues that blow up, who don't insist on good change processes or who don't listen to the congregation all provide kindling for eventual conflict. Healthy boards pay attention, ask the hard questions, remain united and provide directional clarity for the church. The better your board the less likely that conflict will get out of hand.
8. Lack of leadership from the senior leader or his team. In the absence of leadership, someone will step into the leadership vacuum, sometimes multiple individuals will. Passive senior leaders (If I just preach everything will be OK) often lay the groundwork for conflict through their passivity. Under passive leaders, staff is without direction, dysfunctional leadership paradigms arise and and the congregation wanders like Moses and the Israelites in the desert. Both controlling leadership and passive leadership can easily lead to conflict.
You may not have conflict at present but if any of the eight issues above apply to your congregation you may want to pay attention as they can be antecedents to trouble down the line. If you suffer from several of these issues your chances of conflict go up significantly.